Home sales have risen to levels last seen before the lockdown in key markets, including Mumbai and Delhi, according to data compiled in a note by the research arm of rating agency Crisil. The note, released on Thursday, says some markets have seen even higher sales than before. Maharashtra, especially Mumbai, witnessed sales which were 10-30 per cent higher than the beginning of the year, the firm noted.

The recovery is more evident since September. Monthly figures showed growth compared to the same period last year for Mumbai and the rest of Maharashtra. Numbers in Delhi are still lower than in 2019. However, they are back to levels seen before the lockdown was imposed in March. The Reserve Bank of India (RBI) cut interest rates sharply to deal with the accompanying economic slowdown. These and other factors lead Crisil to estimate that affordability in the top ten cities of India has improved by around 35 per cent over the past five years. This is said to have helped first-time homebuyers and others, including non-resident Indians.

The quarterly results of listed real estate players have also improved. Crisil noted that growth beat expectations in the September quarter. Bookings for many reached pre-Covid levels. The report noted that listed players' business had been more resilient than the markets in which they operate.

This might suggest a shift towards key developers. Such a trend was also seen before the pandemic, and is expected to continue in the second half of the year. The sustenance of the trend towards higher sales during October will have to be watched after the festive season, it said. Primary sales will fall between 40 and 50 per cent in the top ten cities this year, according to the report.

The S&P BSE Realty index has underperformed the Sensex, whose movements are seen to be reflective of how the market is doing. 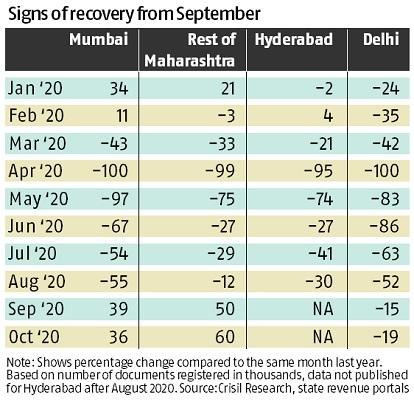